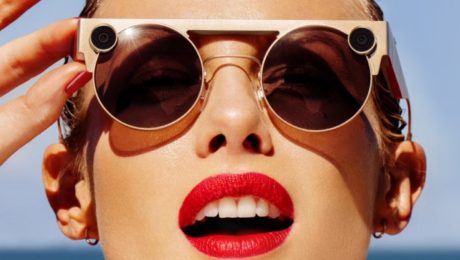 Do you remember the mysterious Magic Leap? We talked about it here and here, trying to unveil what is the product that actually made Google invest $542 millions and many more money from other colossuses as Alibaba and Qualcomm. To figure out this information isn’t easy, since Magic Leap’s strategy seems to be to work in silence, release from time to time something that leaves the users amazed, then go back to silence once again. The first video showed a “normal” day in Magic Leap’s offices, that was “averagely” facing an alien invasion; the other video we seen was a demo, again filmed in the company’s offices, showing a little robot going around and other superimposed animations.

Now, just in the middle of the AR success after to the release of Microsoft HoloLens Developer edition, another surprising video was published: posted online during last week, it shows augmented reality used in everyday life.

The video is in first person and shows,  superimposed to the normal view, a menu through which is possible to choose among different sections and to receive also notifications: one of the examples is a school research that interactively takes life in front of our eyes. Another notification informs us that an item in our wish list is available again: opening the window we have the possibility to buy it. Then, raising our eyes, we can see a underwater scene with beautiful jelly fishes swimming above our head.

Once again Magic Leap teased our curiosity: we can’t wait to know some more details about their project.

Microsoft HoloLens’ developer version will be delivered soon: the first lucky ones that paid $3000 will start to receive the new headset from March 30th.

While waiting for the shipping, Microsoft is showing to the future developers the different possible uses of the augmented reality headset; one of these surprised many: it’s called Actiongram and it’s an app for HoloLens that makes possible to film ourselves or other people while interacting in video with holograms.

The idea is nice, but don’t expect special effects as in the cinema though: Microsoft wanted just to offer to the developers who don’t have any CGI or animation skills the possibility to have some fun shooting short videos in which they can insert special holograms previously created by the producers of the app.

“In order to provide great holographic content to help inspire creators, we built a holographic studio where many different actors, characters, objects, and creatures can be captured as holograms,” Microsoft wrote in a blog post previewing the app. “Actiongram is an app that allows people to place this rich holographic content into their real world environment, and record a mixed reality capture (MRC) video.”

Together with the announcement, the company released also an explanatory video that shows some examples of possible use of the app, but also how easy it is to set a video: in pure Microsoft style, an holographic menu appears in front of the users’ eyes, overlapped to the view thank to HoloLens;  from here it will be possible to choose the hologram to insert in the scene.

Which subjects are available? There’s actually a lot of choice: from the dinosaur to the astronaut, we can’t wait to try them all!

This is Microsoft’s official video:

[VIDEO] Transform your smartphone in a hologram projector

It’s August, most of us are in holidays and have some more available time than usual: while waiting to finally get in our hands a virtual reality or augmented reality headset, why don’t we try having fun with our smartphone? From videogames to furnishing, to makeup, there are many apps to download for trying augmented reality on your mobile devices, e.g. Experenti’s one, that you can download for free for Android and iOS and test with our example tags.

Now you can also have fun transforming your mobile device in a hologram projector thanks to the video tutorial created by Mrwhosetheboss, that became viral in no time.

The materials needed are pretty common and it’s very easy to build.

– draw and cut a trapezoid on the graph paper

– use the shape to draw the trapezoid on the case

Now you just have to go to the video-demo link in the description of the tutorial, put the lens on your smartphone’s screen and prepare to be surprised!

Google Translate vs La Bamba: Google celebrates the update of the app with a funny video

Google Translate and augmented reality? A new update of the famous translation app is here and Big G is presenting it in the funniest way possible!

One of the most incredible features of Google Translate is for sure the one that, through the mobile app, makes it possible to target any phrase written in a different language and translate it simultaneously.

Imagine it in action while you are traveling: you are in a foreign country and you need to read the signs, or maybe you need to read the local dishes at the restaurant: it won’t be anymore necessary to put vocabularies in the luggage, because Google’s app will help us in all the situations in which we need translation of a text despite not knowing the language.

Until some days ago, the translation was available for seven languages (English, French, German, Italian, Portoguese, Russian and Spanish), but now they have been raised to 27!

If it wasn’t enough, all this is happening without the need of a wi-fi connection or mobile data traffic and way faster than before.

You don’t believe it? Watch the video that Google Team created to celebrate this news using their app to translate simultanously a song we all know, La Bamba:

If you want to know more about how Google Translate works you can also watch this video:

Together with this, Google improved their translation app even in the voice version: now it will be possible to have a fast and precise conversation in another language even with slow connection.

Both these improvements will be useful for the countries in which fast connection is not yet available: now it will be possible to use these instruments in almost every part of the globe, without problems!