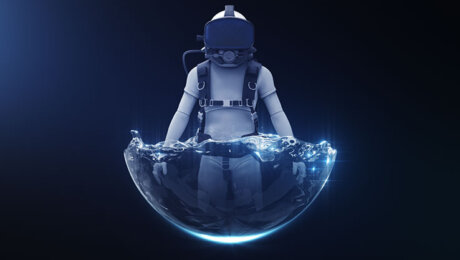 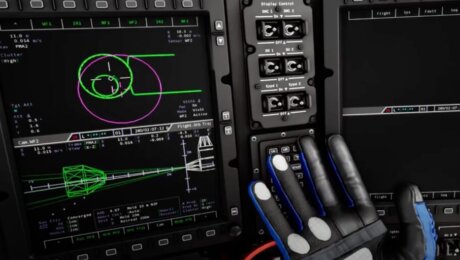 Do you remember Project Sidekick? It ‘s the name of the collaboration between Microsoft HoloLens headset and NASA: two samples of Microsoft’s new product for augmented reality vision have been sent to ISS, the International Space Station, for testing and studying the use of alternative realities in space.

The first step, actually, was to test the headset off the coast of Florida during a NEEMO (NASA Extreme Environment Mission Operations) mission, held underwater to simulate absence of gravity  and extreme conditions. After this test, HoloLens reached the international team of astronauts to be tested in orbit. Sidekick Project has two modes: Remote Expert Mode and Procedure Mode; the first one lets experts on the ground see through Skype what the astronauts are doing, helping them with difficult and delicate tasks, the second helps astronauts learn how tools and machines work. All this is possible taking advantage of augmented reality.

For sure HoloLens is pretty handy in situations in which it’s necessary to be supported by the ground base o to fix a broken machine, but this doesn’t kill the recreational side of the device; Tim Peake and Scott Kelly, part of the ISS Team, took advantage of this to have a pause from work and test augmented reality in space, but another kind than the one you could expect: in the video they play an interesting Space Invaders match in the air 😉

HoloLens headset tried by NASA in the NEEMO mission

There’s nothing to say: Microsoft’s augmented reality headset, the famous HoloLens, knows how to make people talk. After the demonstration at gamers’ conference, during which Microsoft showed us the future of Minecraft when implemented with augmented reality, we passed directly to the collaboration with NASA and the space missions. In fact, as already said in a previous post, HoloLens will be used on the ISS, the International Space Station, to help astronauts especially for solving technical issues; in particular it will be used in the missions to Mars, where, since of the distance, the communication are delayed (up to 24 minutes!) and this could create complications in case of malfunctioning.

A HoloLens headset would have reached already the International Space Station, but unluckily it was destroyed in the explosion of the Dragon spacecraft the 28th June. Anyway, even if not in space, the device is being tested: part of the equipment to test, in fact, was destined to be tried underwater, in the NEEMO (NASA Extreme Environment Mission Operations) station, operative 45 feet (17 meters) underwater off the coast of Key Largo, Florida.

This month NEEMO will house four “waternauts” for 14 days: the captain of the mission, Luca Parmitano (a veteran of Expeditions 36-37 in 2013), never-flown astronauts Serena Auñón (NASA) and Norishige Kanai (Japan Aerospace Exploration Agency) and David Coan, NASA EVA management office engineer. Two technicians, who are also professional divers, live with them in the habitat to run the facility. The mission, started the 20th July, will test some equipment (between which a HoloLens headset and a second headset from another manufacturer) in a extreme environment, similar to the space one, and will help the astronauts getting used to the gravity conditions on asteroids (very low) and on Mars (about 1/3 of Earth gravity).

The famous headset will be used to help NASA Astronauts during the missions out of Earth: they will test the gadget straight away aboard the International Space Station as part of Project Sidekick, a project that will enhance astronauts work and life, especially in the fields of training and task efficiency, through the availability of assistance when and where they need it.

HoloLens, infact, used in “Remote Expert Mode”, will make it possible to connect an expert on Earth via Skype with the wearer: the controller will see what the astronaut is seeing and so will be able to help with maintenance and problems. Since in space the connection isn’t always at its best and often delayed , the headset will also operate in “Procedure Mode”, with local instructions and videos that will help solve the main problems immediately.

“HoloLens and other virtual and mixed reality devices are cutting edge technologies that could help drive future exploration and provide new capabilities to the men and women conducting critical science on the International Space Station,” Sam Scimemi, director of the ISS program, said in a statement. “This new technology could also empower future explorers requiring greater autonomy on the journey to Mars.”

Microsoft HoloLens will be tested in two different times and modalities:

– one headset has just departed June 28, with the SpaceX’s seventh commercial resupply mission to the International Space Station; the astronauts will be able to try it and see its potentialities.

– HoloLens will be tested also during NEEMO (Extreme Environment Mission Operations) expedition 20, starting July 21, where they will be tried for two weeks in the world’s only undersea research station, Aquarius, by a team of astronauts and engineers.

Here you can see the first tests of the Sidekick Project:

NASA tests Augmented Reality glasses to be used on the ISS

Augmented Reality can be very useful for many operations; during these months, we saw it used for various purposes, sometimes on mobile devices, sometimes on headsets. If it can be so useful daily on earth, think how much it could improve the life of astronauts in space. This is why NASA is testing a pair of Augmented Reality glasses that, if successful, are going to be used on the International Space Station.

At first, NASA tried to approach repeatedly Google trying to get them to work on a pair of special Google Glasses, but the Company said they were working only on consumers.

So NASA has partnered with San Francisco-based Osterhout Design Group (ODG) to develop augmented reality glasses that could supplement computers for astronauts. The ODG Company has been building high-tech glasses for commercial and government use for the past six years, and the latest model pack HD displays and cameras, Wi-Fi, GPS, positional sensors and headphones. Currently these glasses have been used mostly for military use, but now the company, while testing also with NASA, is preparing a version for the consumer market.

The primary objective is to help astronauts fixing equipment in space: now they do that just reading printed instructions, but with these new glasses, they would be able to get the directions directly in front of their eyes since they will be uploaded in the headset. This will leave their hands free, also, making it easier to fix.

“As electronic directions and instructions replace paper checklists and longer duration missions are considered, there is a need for tools that can meet evolving demands. ODG’s technology provides an opportunity to increase space mission efficiencies and we are pleased to explore its potential in human spaceflight while also advancing its use here on earth.” said NASA Johnson Space Center Engineering Director Lauri Hansen. “Just put the glasses on and say ‘Next step,’ and you’re looking through an instruction manual”.

The glasses are currently being tested in NASA’s underwater Extreme Environment Mission Operations lab before being used on the ISS.