Italy is becoming pretty technologic about tourism, especially when linked to the historical and archeological heritage: after the augmented reality reconstruction of Ara Pacis (you can find the article here) , now it’s the turn of Trajan’s Forum!

Thanks to the project “Museo Glass Beacon: the museum of the future“, it will in fact be possible to take a unforgettable visit of the Imperial Forums Museum in the Trajan’s Markets, during which we will be able to experience the museum path in a completely new and immersive way. The monuments will come to life in front of our eyes thanks to an app created ad hoc and the use of augmented reality viewers Glass and Beacons: information, text, images, video or an audio file about fourteen main monuments inside the path ill appear in front of us thanks to the Beacons that, as we approach them, will activate the augmented reality glasses.

This project is the result of the competition “Future Culture” announced by Regione Lazio last year, open to young creatives and aimed to the realization of an hardware and software product with multimedia characteristics for the innovative fruition of cultural events and contents; the competition has been won by Mirko Di Ciaccio with this project, that has been accepted straight away by the Museum and supported by Sovrintendenza Capitolina dei Beni Culturali, then made technically possible by ETT S.p.a.

For two months, from October 14 to December 14, inside the Imperial Forums Museum in the Trajan’s Markets will be possible to receive for free one of the 9 augmented reality viewers Glass and to experience the emotion of seeing one of Italian archeological heritage come to life.

We think this is a good occasion to enjoy one of the major archeological marvels on the Italian ground in a unforgettable way: don’t miss it!

Did you like this topic? Experenti creates also augmented reality solutions for tourism: try them with our free app (iOS – Android) after downloading the example tags.

Dead Men’s Eyes: an app that brings past-worlds to life

Imagine you could live in a past era through the evidence it left: buildings, streets, artifacts. If history is your passion, probably you already did and also thought many times: “if only I could have a time machine!”

It seems that now someone passed from the simple thought to the action: his name is Stuart Eve, he is an archaeologist and he’s working on an app for mobile devices called “Dead Men’s Eyes” that could take in front of our eyes and – why not? – all around us, the past. How? With Augmented Reality, of course!

First Eve built a system based on a smartphone, an Arduino microcontroller and a Unity3D application. As a second step, he went through the sites recording his path and ideas, and then he recreated the landscape in a coordinate-based mapping program. Last step: he created the structures and placed them into their proper locations on the map with the Unity3D.

At this point, with just an iPad in the hands he was able to go around and see the past come to life. In the video below, you can have an example of the augmentation of a Roman Fort:

Eve is even more ambitious: he is working on taking to the very place they belonged long ago not just only sight, but also smell and sound of the historical places. This is still a bit to work on, though, but the idea is incredible.

If you are asking yourself: yes, the name of the app is inspired to a book, a short story by M.R. James called ‘Dead Men’s Eyes’ (or A View From The Hill) in which a man uses a pair of old binoculars to view grisly episodes from ages past. Very appropriate, isn’t it? 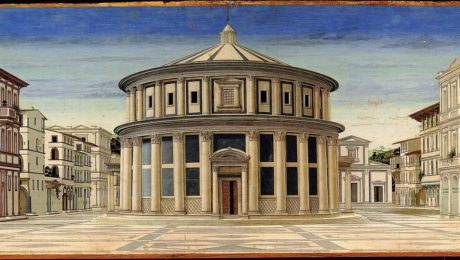 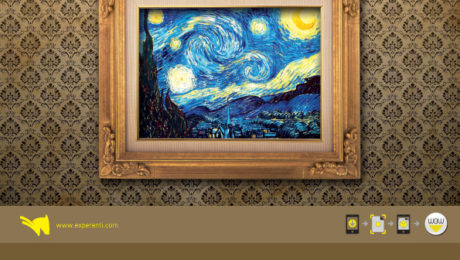 Thanks to the diffusion of smartphones and new technologies, Augmented Reality and Experiential Marketing are every day more spread and used in advertising.

A new example of creative use of these two elements had been added to the case histories some days ago: the platform Curioos, a digital art marketplace helping artists to print and sell their works, launched its new augmented reality app.

Do you still doubt about buying that painting because you are not sure how it will look on your living room wall? Finally, you will have the possibility to try it before the purchase. It will suffice to download the app, print a code that will be sent to you when you request it and to hang it up to your wall, where you would like to see the artwork. Focusing the scene with your smartphone you will see the painting appear.

This news tells a lot about what is the direction that art marketing (and not just that) is taking in last times: while the channels that until some years ago were essential are turning in just secondary parts of brand advertising, new communication frontiers are emerging. Not anymore simple descriptions of the products, but true, vivid experiences.

We know this very well in Experenti: it is not a case that some of the example tags in the Press Kit (Don’t you have it yet? Download it here) are dedicated especially to art and its presentation.

Follow us in the visit of Van Gogh exhibition: you just have to scan his famous “Starry Night” and load the content. When you will hit “play” the WOW experience will start.

Now maybe you want to visualize some design products, or even show your architecture projects in 3D.

This is possible, now and easily.

Experenti: we help your contents becoming an adventure.