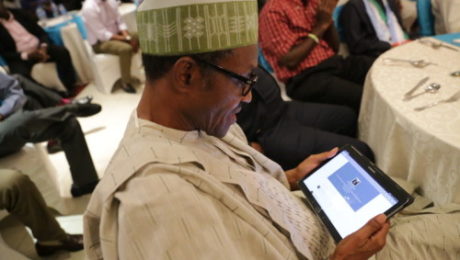 Augmented Reality day by day is making progress in leaps and bounds, becoming part of our daily life in always more ways. Only two days ago, we talked about the use and development of this new technology in the automotive field, and today we talk about its use in politics.

We are in Nigeria, where the presidential candidate of the All Progressives Congress (APC), retired ‎General Muhammadu Buhari and his running mate Professor Yemi Osinbajo have adopted an augmented reality strategy to reach out to the country’s youth. In practice, the two candidates realized that using a traditional election campaign, based on TV and talks, they weren’t going to reach the young audience. So, in collaboration with Malam Garba Shehu, Director, Media and Publicity of the Campaign, they thought to an app for Android devices using Augmented Reality to communicate with this part of voters.

Inside the app there are different features: the main one is the message by Buhari and Osinbajo, whom registered a talk that could be seen through the phone. The interaction system with the message is revolutionary: the two politics wanted young people to feel engaged and so they gave them the possibility to answer through the app with comments and ideas, then shared on social media.

In Shehu’s words: “The technology provides a channel of expression for the young people of Nigeria, through which they can also voice their aspirations and hopes. The young peoples’ expression and voice regarding their decision for Nigeria’s future will be shared through these apps and distributed through popular social media channels such as Facebook, Twitter, Instagram and others.”

Among other things, the app permits to take a selfie with the two candidates.

We end sharing again some Shehu’s words: “Augmented Reality is a cutting edge technology that brings “magic” to android smartphones and tabs”. For sure, this is a news for Africa, since it’s the first time this technology is used during elections.

The app is called “Next for Nigeria” and you can download it on Google Play. To try it, simply focus on the party logo; this will trigger the technology.