HTC and Valve together for Vive: the future of gaming will be augmented 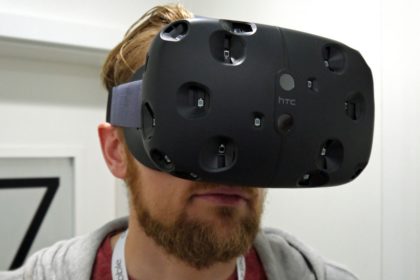 Reading the news about Augmented Reality seems to be no doubt on the passage from mobile to wearables. Today, to further prove it, we talk of the announcement of a new headset: the name is Vive and will be created by HTC in partnership with the popular gaming company Valve Software.

What are the features of HTC Vive?

Talking about the design, HTC prototype looks similar to Facebook’s Oculus Rift headset, but there’s a substantial difference compared to other competitors: Vive, other than the headset, comes with some base stations” that you place inside your room and handheld controllers, so the device can track your physical motions and your moves in reality are transferred in the virtual reality.

As you can imagine, this key feature is widely related to the world of videogames; after all, Valve is the owner of the famous gaming platform Steam, which counts for not less than 125 million active accounts, and surely is not a detail that can remain in the background.

Nonetheless, HTC didn’t think only to gaming for its Vive, but also to other possible application fields; using HTC chief Peter Chou’s words:

“Virtual reality will totally transform the way we interact with the world, and will become a mainstream experience for the consumer,” he said “Attending real-time concerts, learning history, watching an incredible movie, reliving memories through photos or shopping experiences will be transformed.”

An example of this is the promotion of movies and TV shows: the company announced also other partnerships with Lionsgate and HBO.

For now HTC Vive is available only in the Developer Edition, but the company said that around the end of 2015 will be released also the Consumer Edition. Do you want to be the first to know? Keep an eye on their site http://www.htcvr.com/

Enchanted creatures in Angus Park thanks to augmented reality

BMW counts again on augmented reality for their Head-Up Display

HoloLens in action with Minecraft at E3: Microsoft amazes the gamers