Ingress soon on Android Wear smartwatch: a deeper look on the AR Game that betters your life

It’s been online from 2012 and soon it will be available even for Android Wear smartwatch. Who knows what we are talking about?

About the game Ingress, of course.

If you don’t know what we are talking about, here is a short description: we are sure after you will want to try it!

Ingress is a mobile videogame developed by Google and based on Augmented Reality, since it’s played directly on the real geography of the places around us. It works like this: once you downloaded the app and accessed the game, you are asked to join a faction choosing between Enlightened and Resistance. You can’t change the faction later, so be sure of your first choice. At this point, through your phone’s GPS, you will be localized on a map resembling Google Maps, just more sci-fi. Immediately you will be able to see some big lit up points: these are the “Portals”, generally put where historical and artistic spots are. The colors of the Portals will be different, depending if they are neutral or conquered by the Enlightened or the Resistance. Physically moving around we will collect Exotic Matter (XM), an unknown form of energy found on the entire planet, which will allow us to interact with the Portals. The aim of the game, of course, is to conquer the portals of the opposite faction, attacking (Hack) and then defending them with Resonators and Mods.

Ingress is not only an interactive game, but also an app that helps us to know better the world we have around through Augmented Reality: some Portals, in fact, are in interesting places we never even knew the existence of. In addition, in an age in which a lot of us pass hours and hours sitting at the desk, a game based on the physical interaction with the places we have around is good for health and exercise.

Ingress is an example of a playful activity that, thanks to Augmented Reality, affects positively on the users’ life. Ingress is available for Android and iOS and it’s free; what faction will you choose?

HTC and Valve together for Vive: the future of gaming will be augmented 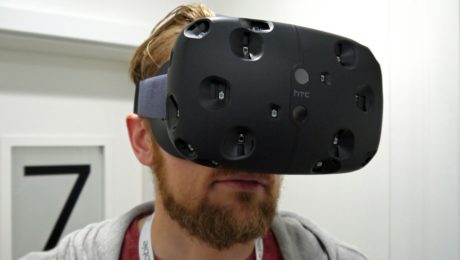 Reading the news about Augmented Reality seems to be no doubt on the passage from mobile to wearables. Today, to further prove it, we talk of the announcement of a new headset: the name is Vive and will be created by HTC in partnership with the popular gaming company Valve Software.

What are the features of HTC Vive?

Talking about the design, HTC prototype looks similar to Facebook’s Oculus Rift headset, but there’s a substantial difference compared to other competitors: Vive, other than the headset, comes with some base stations” that you place inside your room and handheld controllers, so the device can track your physical motions and your moves in reality are transferred in the virtual reality.

As you can imagine, this key feature is widely related to the world of videogames; after all, Valve is the owner of the famous gaming platform Steam, which counts for not less than 125 million active accounts, and surely is not a detail that can remain in the background.

Nonetheless, HTC didn’t think only to gaming for its Vive, but also to other possible application fields; using HTC chief Peter Chou’s words:

“Virtual reality will totally transform the way we interact with the world, and will become a mainstream experience for the consumer,” he said “Attending real-time concerts, learning history, watching an incredible movie, reliving memories through photos or shopping experiences will be transformed.”

An example of this is the promotion of movies and TV shows: the company announced also other partnerships with Lionsgate and HBO.

For now HTC Vive is available only in the Developer Edition, but the company said that around the end of 2015 will be released also the Consumer Edition. Do you want to be the first to know? Keep an eye on their site http://www.htcvr.com/

Sony SmartEyeglass and Attach: the Developer Edition will arrive in March 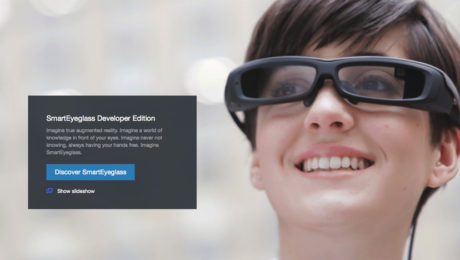 SmartEyeglass is Sony’s answer to Google Glass: a pair of glasses as in the case of the Cupertino company, but with some significant differences. The first difference is clear: while Google Glass are not catching the eye at first gaze, Sony SmartEyeglass have thick frames resembling ski goggles; consequently, they are not particularly discreet. In addition, SmartEyeglass have to be worn with a disk pinned to clothes: this is the battery and the remote for the glasses, so the user doesn’t have to vocally communicate with the Android system. This is a pro because the user will not have to say in public what he is going to do, but also creates a privacy issue: the people interacting with him will never be sure if they are being captured on screen. Last but not least, there’s a big difference in the display: while Google Glass have a delimited view on a side of a lens, SmartEyeglass have a display integrated in the lens and monochromatic, with layered vivid green written information. Even in this case there are pros and cons: the focus of the layered elements on Sony’s product will be easier, but the view will be mostly occupied with data. To make an idea of how this device works, watch the presentation video:

Another product presented by the japanese company, maybe even more interesting, is Sony SmartEyeglass Attach: it’s a little device that can be attached at the side of our glasses and sunglasses to turn them into head-mounted displays. As for Google Glass, SmartEyeglass Attach creates in front of one of your eyes a discreet display that can be easily ignored until required. The battery in this case is inside the little device, so it doesn’t have to be pinned to clothes as we seen for SmartEyeglass. At CES, the SmartEyeglass Attach was already on the Sony glasses, so it was not possible to try it and be sure of the ease of the attachment on the glasses, but the device seems to be very light and easy to use.

While Sony SmartEyeglass Attach doesn’t have a release date yet, the Developer Edition of Sony’s SmartEyeglasses first seen at CES 2015 are now available to pre-order from Sony for £540 plus VAT (circa 670 euro).

Who never tried View-Master? Maybe you don’t know its name, but surely, looking at the images of this article, something will come in your mind. Presented for the first time in 1939 at the World’s Fair in New York, this toy headset accompanied generations of children, surprising them with its 3D images. In the past, this seemed pure sci-fi; today, on the other hand, it’s like prehistory of technology, and in fact Google and Mattel created a partnership to modernize the toy viewer. How? With Augmented Reality, of course!

The new View-Master will run on the Google Cardboard platform and will have special contents in Virtual Reality and Augmented Reality for children and families. The two companies, which gave in last days the news of the production of the new 3D stereoscope, said that the headset would work with any type of smartphone on any operating system.

Obviously, some changes have been made to the original device: the images disks are now “Experience Reels”, and they’re not inserted directly in the viewer but they just remain in front of the user. What is inserted in the headset is instead our smartphone, with which we’ll aim at the reels. The famous View-Master’s side button, that in the original device was used to roll the disks, now is used to choose the options that will appear in front of our eyes once we focus on the Experience Reel.

As you can see in the video below, this will immerse us in a unique, highly interactive experience.

View-Master will work also with all the other Google Cardboard apps, that you can download here.

Another surprise is the price: since View-Master is basically just a plastic phone holder, the device is only $29.99 (with one experience reel included); the Experience Reels will be sold in multiple packs for $15.

It seems that View-Master will be released next October.